I’m not sure what week of marathon training I’m on now (these past few weeks have been a whirlwind so I’ve lost track) but this past week is definitely a blog-able week of training.

Last Sunday, since I went home for the weekend, I got to go trail running in Delaware with my dad and his two running friends (a serious ultrarunner and an aspiring ultrarunner). Considering I was the only female, my speed on the trails was much slower than theirs – especially on the uphills. There were multiple times that they left me in the dust on the uphills despite my determination to keep up with them. But I didn’t let that get me down. I just went my own speed and caught up to them on the downhills.  And you’re probably wondering where these hills are in Delaware.  Trust me, considering we ran 1400 feet of elevation gain/lost, there were hills.  Almost 2 hours into or run we found ourselves in the midst of a cross country race. We had to outrun the middle schooler headed in the same direction as us which actually ended up being harder than we thought (probably because we were nearly 2 hours into our run and he was only 10 minutes into his race).  We found a side-trail and escaped being caught by the neon-orange hatted child chasing us down.

We finished our run in a little over 2 hours.  My GPS watch read 11.7 miles.  If you do the math you’re probably thinking, “wow, they were running really slow”. This is what happens when you run on challenging trails.  Every step is a pre-contemplated process in order to successful navigate roots, branches, and rocks to prevent ankle rolls.  And plus, long runs are supposed to be slower – especially when you add in elevation changes.  This was a great run spent with great company.  And despite being the only female on this run and being guided by extremely athletic male runners, I would definitely go on a trail run with them again in the future!

I switched my Monday and Tuesday run so that I could recover a little from Sunday’s long run.  I ran 5 miles Monday and 7.3 miles on Tuesday.  The upper part of my ankle hurt these days but I figured it was because my ankles weren’t accustomed to the challenges of the trail since 85% of my runs at school are on pavement.

I also switched my Wednesday and Saturday runs.  Wednesdays are usually work out days but I was doing a 5k on Saturday and I knew that that would be my workout for the week.  And since Saturdays are usually my long run day, I opted to do a mid-week long run instead of a workout.  This day I ran 10 miles. This is also the day I became determined to find a local running club to run with and find some fellow runners to do long runs with for the rest of my marathon training.  My long run averaged just under my goal marathon race pace which I was pleased with.  I just really needed to find some running buddies.

Thursday and Friday were easy runs because of the high mileage earlier in the week and to prepare for Saturday’s race.  Thursday I ran an easy 4.3 and Friday I ran an easy (but torturous) 4 miles.  Friday’s run was marked with unpleasant attitude toward the hills I run on all the time.  I miss being able to run consistent mile splits.  The rolling hills up here make running a consistent pace impossible and that got to me.  I can’t wait to go home and run on the nice trail that runs parallel to my backyard.  I can’t wait to go home and have running buddies all the time.  I miss running with my dad and my dog.  I miss running with Angela and gossiping about life to distract us from the miles.  I miss RRCW.  I just felt mentally defeated after a week of runs and various sorenesses and pains.  I needed to regain focus so I could do well in my 5k on Saturday. 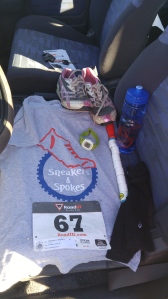 And then it was Saturday.  I woke up, had my typical peanut butter on toast for breakfast, and drove the 20 minutes to the race.  The race was at a well-known amusement park near my college so I knew exactly where I had to go for the race.  This took some stress away because I was familiar with the amusement park.  I picked up my bib and complimentary t-shirt and did a 2.5 mile warm-up.  I had packed my arm sleeves just in case it was cold but after my warm-up I knew I would be just fine with my spandex shorts and the tshirt I packed to run in.  This was also the 1st race I was running since my dad opened his business.  I felt like a sponsored athlete because I was running to represent his business! (see picture)

The race was 100% on the road.  It started with a slight uphill into a short but steep downhill.  90% of the first mile was uphill but I managed to run a 7:01.  I tried settling in with the runners around me.  On the downhill I surged ahead to use gravity to my advantage.  The majority of the 2nd mile was downhill but this mile was slower (7:21).  The third mile started with a 1/2 mile significant uphill that made me realize how tired I was.  I tried not letting it defeat me but I think it did.  As I reached the top of the hill I felt like I could’ve walked faster.  With a half mile left, a man on the side of the road directing runners where to go told me it was all downhill to the finish.  I remember doubting what he said to me because I was expecting at least 1 more rolling hill.  But he was right – the last 1/2 mile was completely downhill.  I ran my 3rd mile the slowest thanks to that annoying uphill.

I crossed the finish line in 22:49.  One of my goals was to average under 7:30 pace.  I averaged 7:19 pace.  I managed to get a 1st in my age group (20-24) award and was rewarded a palm-sized medal.  Because I ran a time I was rather unimpressed by, I opted to run a 4.3 mile cool down.  I probably could’ve ran further because I felt fine during my cool down but I didn’t want to go too overboard.  I finished the day with a total mileage of 10.1 miles and that made me extremely happy!

After spreading the word of my race results to family and Angela, I was reassured that my time was okay considering I’m training for a marathon which is 8 times the distance of a 5k (and yes, I did the math to figure that out). This made me feel better since I was so down about my race.  I also realized much later in the day that Saturday was my third long run of the week.  My Sunday-Saturday mileage was 52 miles….I HAVEN’T RAN A 50+ WEEK SINCE SUMMER 2014!  So making this discovery made me a thousand times happier because I love love LOOOOVE running far. And maybe the reason I ran an unimpressive 5k is because I had already put in 45 miles leading up to that race.  I’m just super excited that I had a great weekly mileage!

After the race I drove to a nearby running store to ask about local running clubs. Although the woman working in the store wasn’t aware of any running clubs in the area, she reassured me that the running store was trying to start to organize group runs.  This made me excited because I reallllllly need people to run with on a consistent basis.  She was also extremely friendly and we had a nice conversation about running and running stores.  It was an uplifting visit!

Today I swam to cross-train since Sundays are typically my rest day.  Despite feeling mentally defeated during the week, I pushed through and managed a week of high miles.  This week’s goals are to make healthier food choices, stay focused on the long-term goal, and to embrace any challenges that come my way.  Although these are all very broad goals, my main focus of the week is just to get through my 3 midterms and exam.  It’s going to be a rough week but I’ve been able to use running as a stress-reliever for the first half of the semester and this week will be no different.

One thought on “Marathon Training Update”